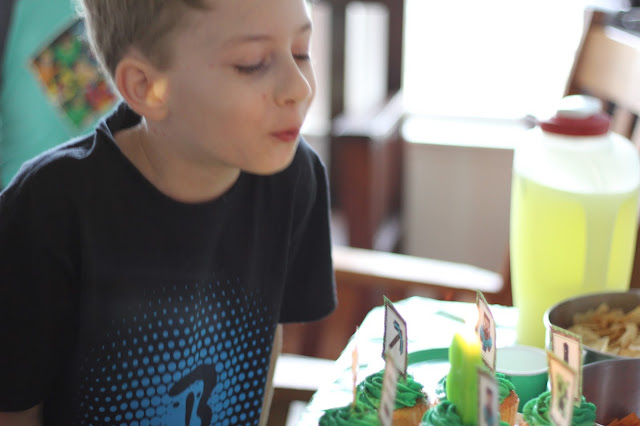 My kids birthdays, all of them, fall within the Holiday season and it can be a challenge to figure out what we're going to do to celebrate. The weather comes into play quite a bit. Is it going to rain? Be freezing cold? We have birthday's the last week of November, the first week of December, and the last week of January. Unlike my birthday, which falls in July, we can't run to the beach for play (unless you love cold days at the beach!) or have water balloon fights. It's a beast of a different kind. This year my children have chosen for the first time in my parenting-life to have birthday parties. You can imagine how that weighs on me! What can we do with lots of kids, mostly indoors? Well, my younger son made it a bit easier on me by choosing a Minecraft theme! So I took to finding some fun Minecraft themed things to do inside. (And an extra something for outside so they could squeal and run around a bit!) This wasn't a party for the weak of heart. We made a ton of messes and it was a ton of fun for everyone.
We started with making Minecraft pops. (Which coincidentally, even though the melting chocolate seized up, was still a win...because who doesn't like candy pops?) For the stand for the pops, I covered a cereal box in construction paper and made fake grass for the display top. They dipped their pops and stuck them in to set up. 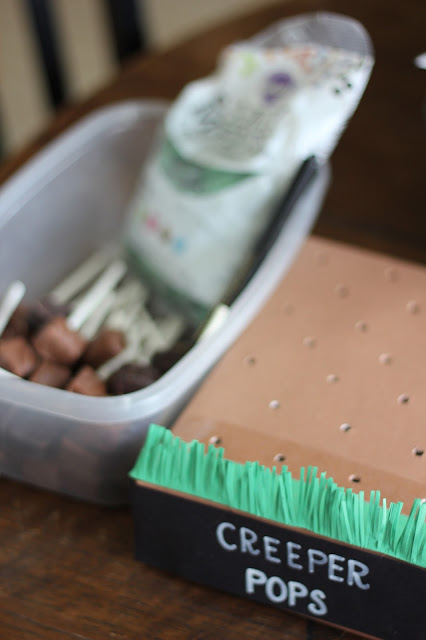 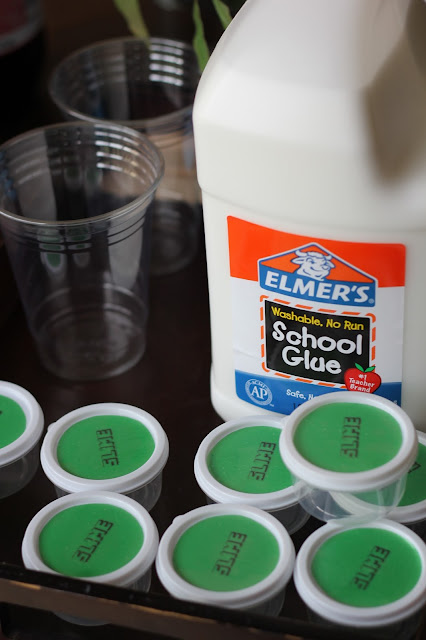 Then the kids moved on to making slime. Don't expect this to go perfectly. It was a perfect mess! They loved it, and honestly I did, too. It was all about making memories. I provided little containers from the dollar store (pack of 10 for $1), with a Slime sticker on top so they could take it home. I also provided paper bags for the kids to put their goodies in to take home. The link for the printable stickers is at the end of the post.
Matthew and some friends decided to spend some time playing video games, so while they did that some of the other kids moved on to making Minecraft keychains with Perler beads. To be honest, I had more paranoia over this than the mess of the slime. I didn't want anyone to get burnt with the iron. (Stay close, adults, to help out! Have the kids let you know when they are ready to melt their project!) I had images of beads everywhere, but I kept everything in a tray on the table which kept everything pretty contained. This was a great activity for the kids who may be a bit on the quiet side or just like the mellowness of sitting still doing something fun and still feel like they're part of the party. And they had another crafty item (or two or three) to take home with them at the end of the party. You can find some fun printable instructions for Perler beads on Pinterest. I printed some out in case they wanted to do those! 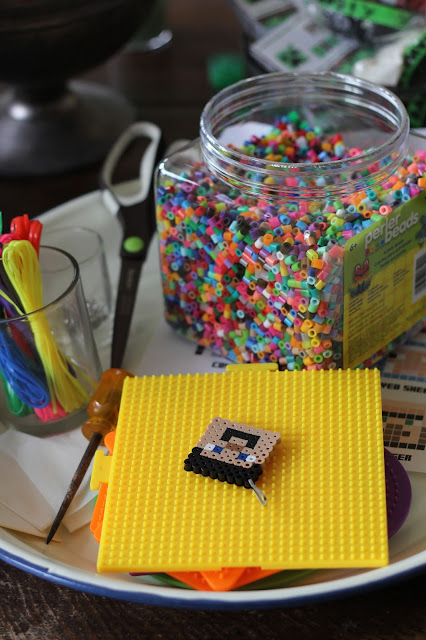 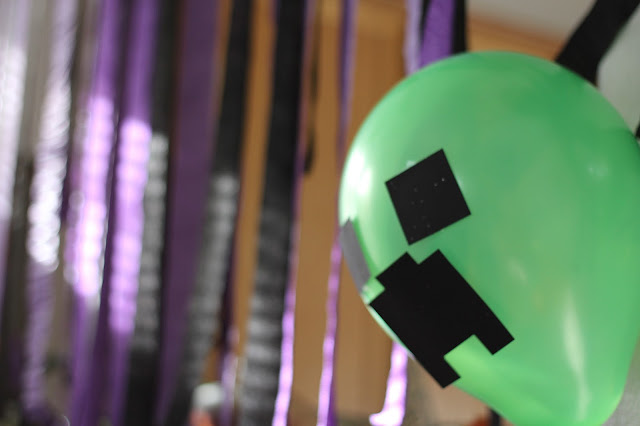 My decorations were super simple. Just a few items from the Dollar Store. And strategic placement of the Ender decor (because my kitchen was a mess. Can I just put in a word here about being real with a house mess? We're all real here. I have kids. We make messes and we don't live in a museum. Dirt and grime, yeah yuck. I try to stay on top of that stuff. But the sink of dirty dishes and piled up mail and some clutter or laundry going in the laundry room? Well, that's real life. I want people to feel welcome in my home, so I'm not making a huge deal out of having a spotless house. No comparing in my little world. You come over to hang out, I'll hand you a cup of Joe or a mimosa and we'll chat real life while I fold a basket of laundry.) 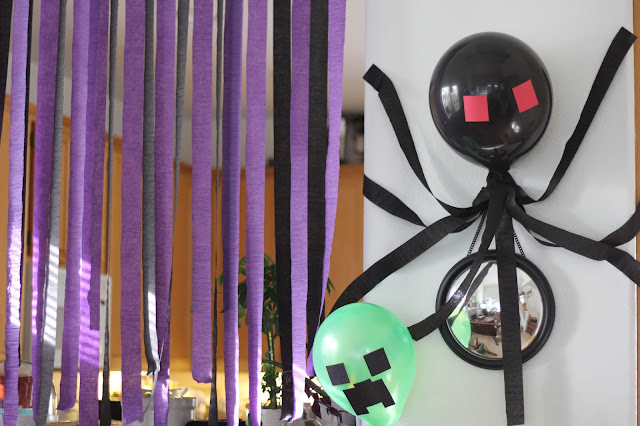 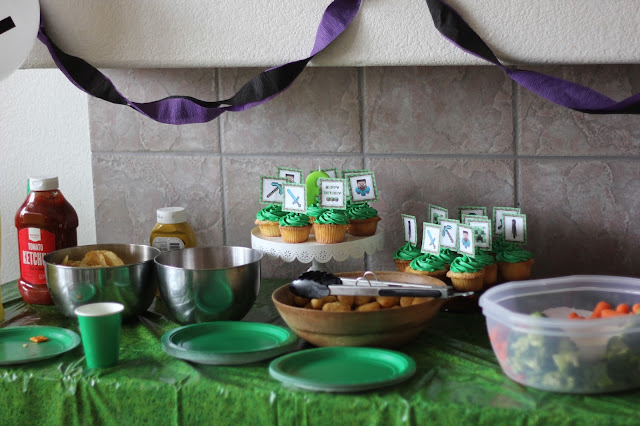 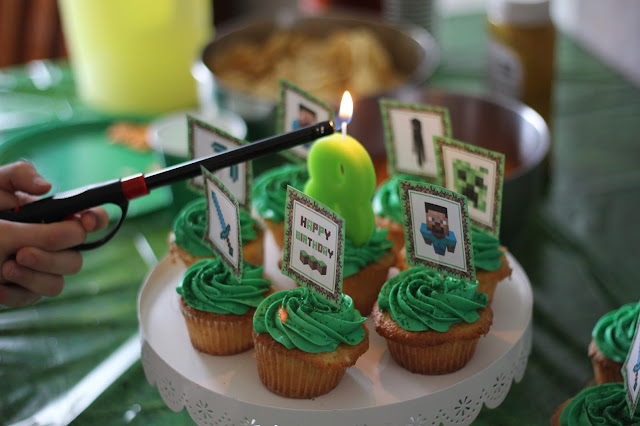 The last hurrah, after cake and presents, before we started wrapping up the party was to let the kids go out and explode some soda. I've got to say, even I was excited about this. We don't have it down to a science, and it wasn't the big explosion we were hoping for (maybe more Mentos???Shake the bottle of soda first???), but the squeals of delight were still worth it! 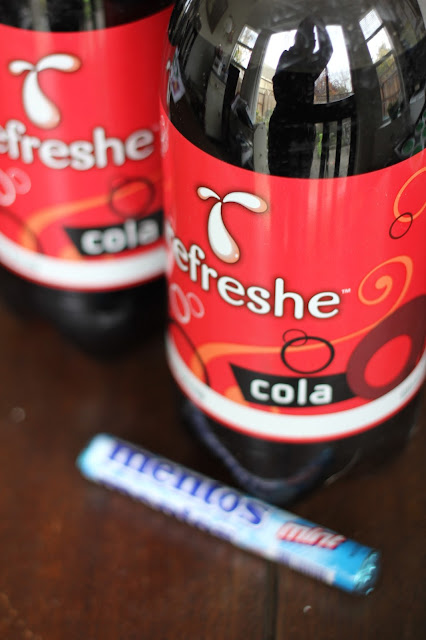 Eventually, when they saw there wasn't going to be the spray of soda everywhere, they took it upon themselves to help it along a bit. It was a huge hit, just the same! Yay for messes! 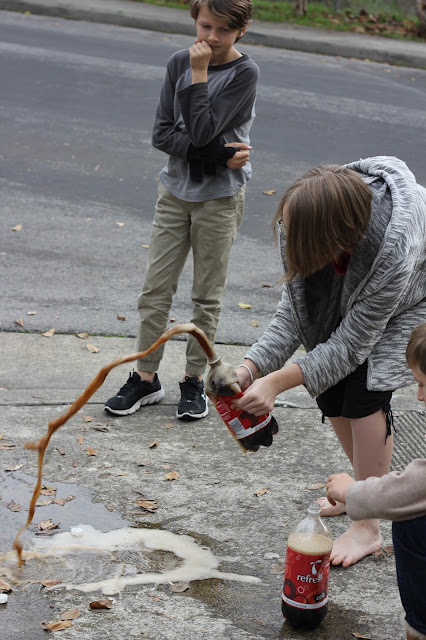 There were a lot of other great ideas that I had in mind, but I figured if we got through these, we'd be good. We sent each child home with their slime, key chains if they had made them, and a little goodie bag with some treats.
It was a blast. Ultimately, we wanted a happy bunch of kids on a cold rainy-ish day, and that's what we got! 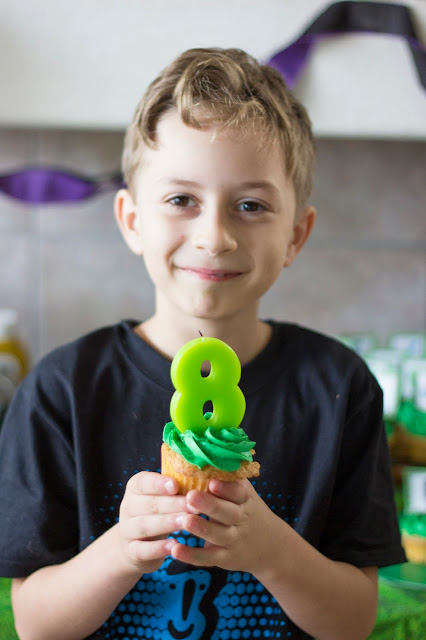 Printables are for private use only.