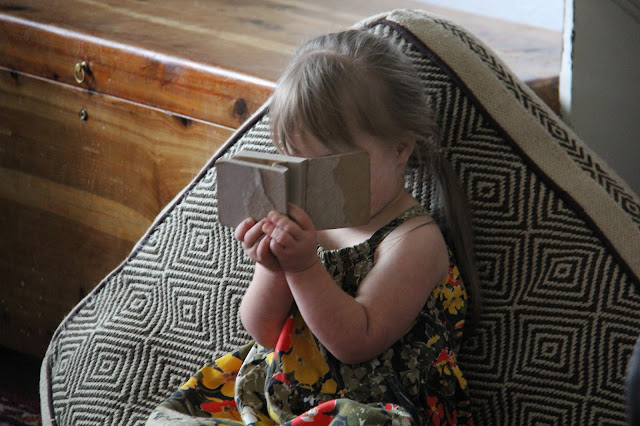 Three years ago I wrote about an experience that I had one day when my youngest daughter was but a wee babe. As mommy to a new baby, and a new baby diagnosed with Down syndrome, I was thrust into a new world that I previously hadn't known. Aside from dealing with getting to know a new baby, any new mom will tell you it can be a stressful time postpartum. It's been a wonderful world, but one that you aren't given a road map for so it took some time for me to adjust and find my footing a bit. I was learning about a new person, learning about what Down syndrome was and how it affected her as an individual, and what this meant for me as her mom.

Looking back I struggled in a way that was a bit different from other parents, perhaps, in that I wasn't heartbroken or distraught over her diagnoses. I loved her. She was adorable, and squishy, and this tiny little thing that fit in the crook of my arm. I loved her with a passion, but was unsure how to express that in a way that other people could understand because when they looked at her they saw Down syndrome first. For me, I saw "baby" first, and Down syndrome was just like a complimentary Sundae after dinner. A perk. I didn't have the vocabulary at the time to express it. I had to grow into this new person that I am and find my voice for her. And in those early days, my way of coping was avoidance of public for a bit until I was comfortable in this new space and more confidant.

So here we are three years later, and I can tell you with confidence that I'd have some different responses to how people react to my daughter when they express anything other than delight in her. She is absolute sunshine. Most of the time. We are experiencing the typical terrible-two's/three-nager stage, so some of her behavior is pretty typical for her age. Even more delightful! I crack up, inside, every time she throws herself on the floor for a tantrum.

Most of the time people are delighted by her. She says hi to everyone. She laughs heartily.  Sometimes at church, she'll escape me and go running up the middle aisle in the middle of a packed house. At first I was a little embarrassed that she was causing a ruckus. But as time has gone by, I've let go of that expectation for adhering to typical rules. She's small for her age, so more often than not it is assumed that she is about half her age, rather than 3 yrs old. No one seems to mind, especially when they hear her belly laugh as I chase her down, as she yells "Hi!" and waves with all her might to the priest in the middle of his homily. I might get some hate over the fact that I actually have really enjoyed the extended baby-dom. Isn't it what we mom's lament over, that baby's don't keep? We've been blessed with an extension of it to some degree, and it's been nothing but lovely. Don't get me wrong, I love to see her accomplish new things and to hear her speech develop. But the extended length of time that it's taken has been nothing but delightful, and makes the goals reached that much more sweet to celebrate.

Some of the struggle for me now comes not from strangers that I may encounter for a few moments, but when I go through needing to discuss the details of my children with other people, like behavioral issues, or needs they might have that typical children may not have. This can be a little harder than the chance encounters. I like to be respectful, but there are those times when it's easiest to dismiss a chance encounter. There is a sort of internal struggle that goes on with deeper conversation, say like with medical professionals that you would expect to know more. On the one hand, we need for the supports to be in place to help them succeed and so we have to talk about the struggles. And on the other hand this can be so incredibly difficult because we also want to share how wonderful and what a blessing our child is to our family and community at large. We need the struggles acknowledged but not to be the focal point of who our children are. I admit that the struggle is more pronounced at times because of the societal stigmas and misunderstandings that still abound from outdated information. But what I've learned from that perspective of a society still catching up is much like what I had to learn as a new parent.

There are definitely still times when I struggle because someone said something insensitive out of ignorance, but I don't take it so much as a personal affront to myself or my daughter. If anything, it says something about the other person.