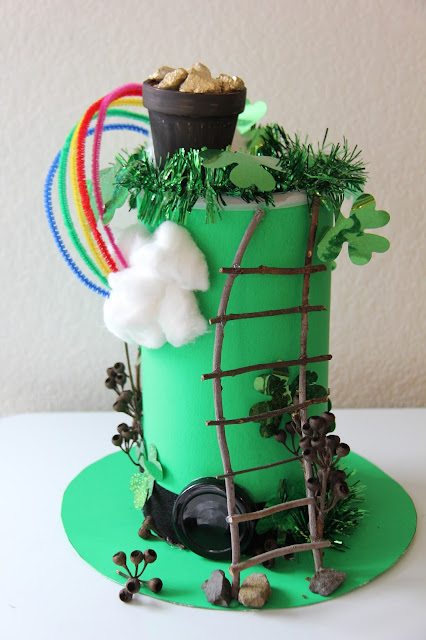 There must be some magic going on because it definitely was magical how it took my son's Kindergarten project to get me back here to share something creative.
Life is just so busy and crazy sometimes. I wish sometimes that I was that stay-at-home-mom that sent the kids off to school and had "free-time" to do crafts and such, but that's just not the case these days! My little's schedules have me running here, and there, and everywhere. Throw in the never-ending (so it seems) stream of sickness that keeps hitting and you've got me running around like a hen with her head cut off. 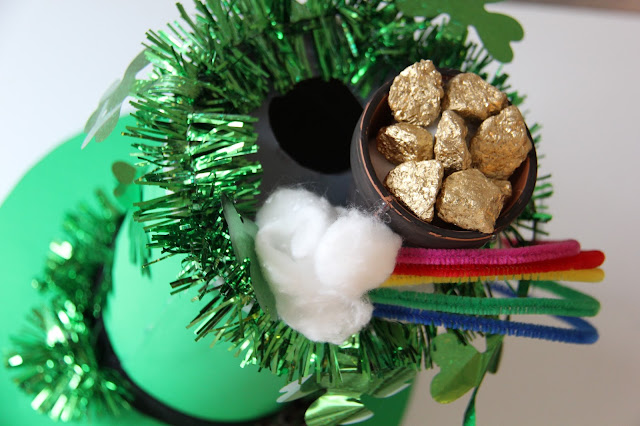 When the teacher sends a notice home from school that a project is due the following week, my deal is to put it off until the last minute. Because I'm busy. Or because I set the notice down, it gets put in the recycle bin, and I forget. Or, likely, a bit of both! This time we were supposed to make Leprechaun traps out of whatever we had around the house. Okie doke. I spent a few minutes looking at ideas, gathered some stuff I had laying around, made a quick run to the Dollar store for the green poster-board and decorative green thingy (what do you call that?), and got out the glue gun. You'll love this. It took about an hour total and turned out pretty well, if I do say so. 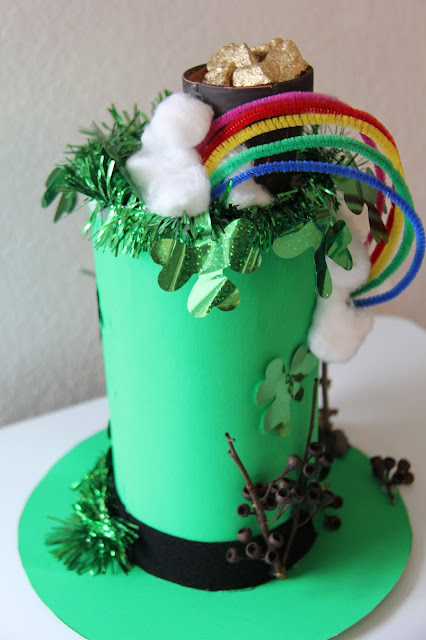 Here is a list of the things I used
First, I made a hole in the lid of the oatmeal container for the Leprechaun to fall into. I traced around a medicine measuring cup. It was a good size. Then I cut and glued the green poster-board onto the container.  Next, glue the lid on.
Using a plate as my template, I cut a round of the green poster-board as the base of my hat and glued the oatmeal container to it's center. Use plenty of glue so that it stays attached as there is only a small rim. 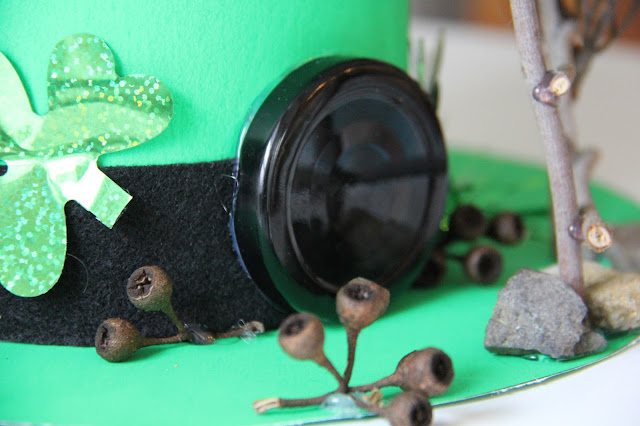 After you've got the basics done, I was just creative in placing the pipe-cleaner rainbow. I didn't want to make it too tall, (It was supposed to fit in his backpack, yeah right!), so I attached them to the side. With a lot of glue. A lot of glue.  And then I covered up that glue with more glue and cottonball clouds. Because that's what we do. We cover up our nasty gluey mess with more glue and fluff so you can't see it! *wink wink nudge nudge* The other end of the rainbow is attached to the top edge of the lid in the same way. Cut a length of your greenery and glue it down around the edge of the top. 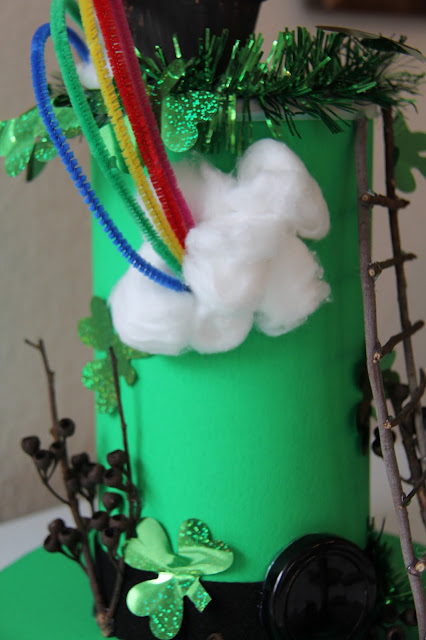 Next step is to have your munchkin pick out a handful of pebbles and spray paint them gold, or just buy some Rolo's or something fun to go into your pot! While your gold dries (if you choose that route), have your little guy use the black marker to color the miniature pot black. Be careful and sit in one spot while doing this. You don't want the pot to break. *cough* (More glue to the rescue.) I filled the pot 3/4 full of cottonballs and glue the pebbles down on top. 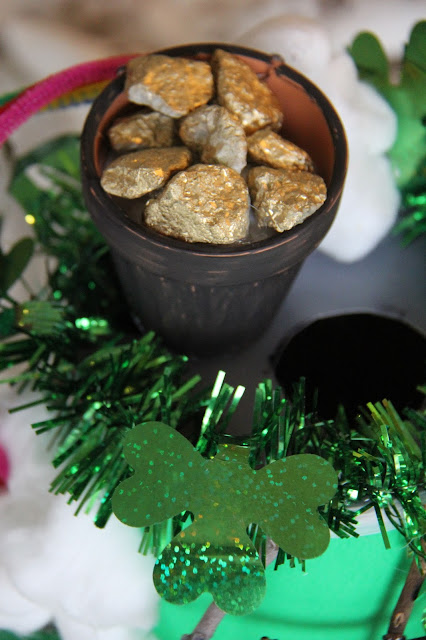 Next step is to make the ladder, which is easy peasy. Have the little one pick out two sticks for the sides and one that you can snip and make into the steps. Glue that baby together and attach the ends to your base and the side of you container. I used a couple of pebbles at the base to give it more stability. The rest is basically up to you as far as decorating. You can add more greenery, more pebbles, more miniature "trees", add a sign. 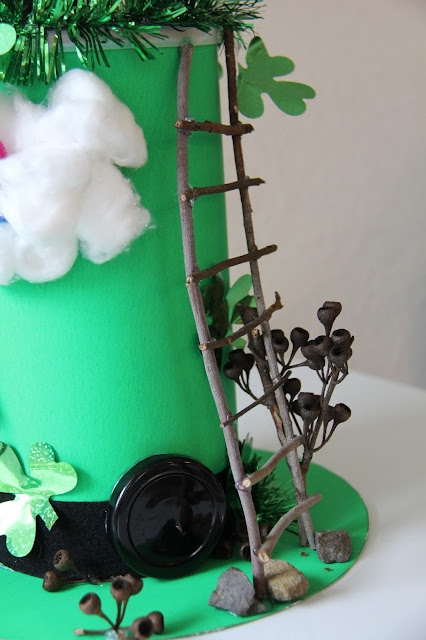 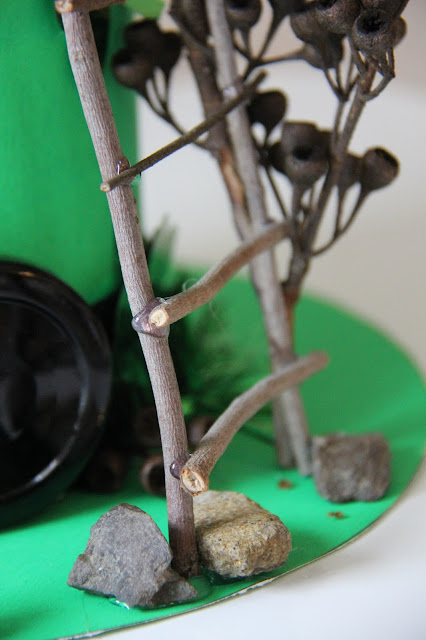 It will definitely make your little one beg and plead to stay up and watch for Leprechauns. My little guy even stuffed some extra cotton balls into the trap hole so he has a nice soft landing when he falls in. So thoughtful of him!

If only I could spend everyday doing Kindergarten crafts. It's always so much fun. The expectations are pretty reasonable, and it's always fun to upcycle something regular into something spectacular! I can't wait for the next one. 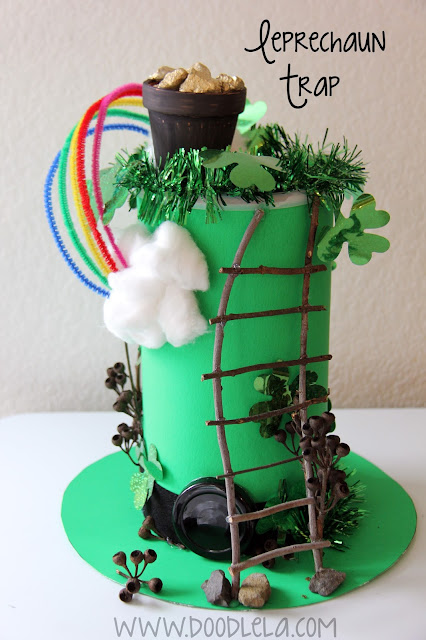