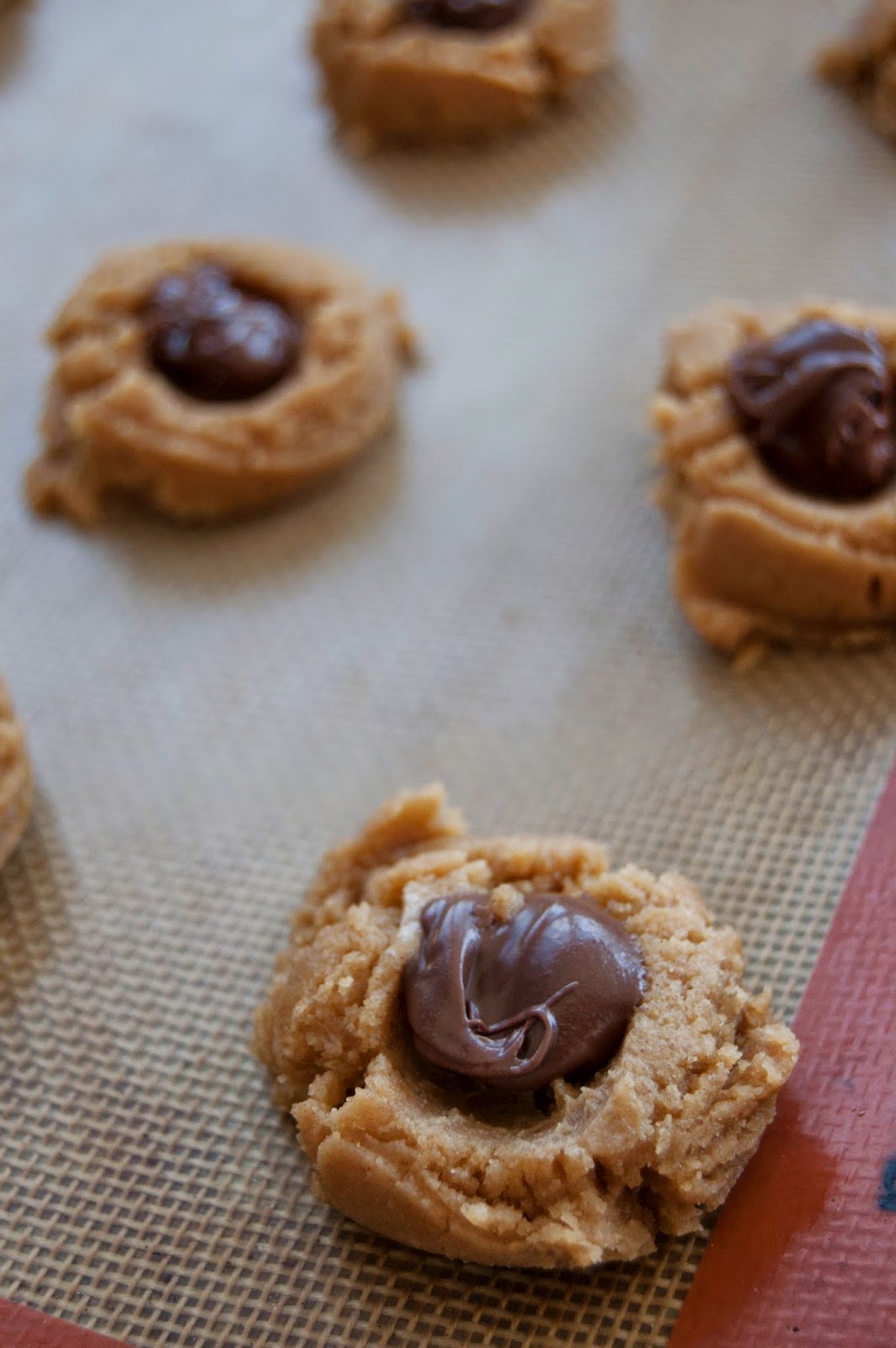 Is this something typical for you to hear from your littles, too?
"Mom, I want chocolate!"
Yea, for us it's pretty much a daily occurrence. My little guy especially has a craving for chocolate. Can't blame him too much. After all, chocolate is pretty good. Can you tell by the Nutella mustache he wears? :) 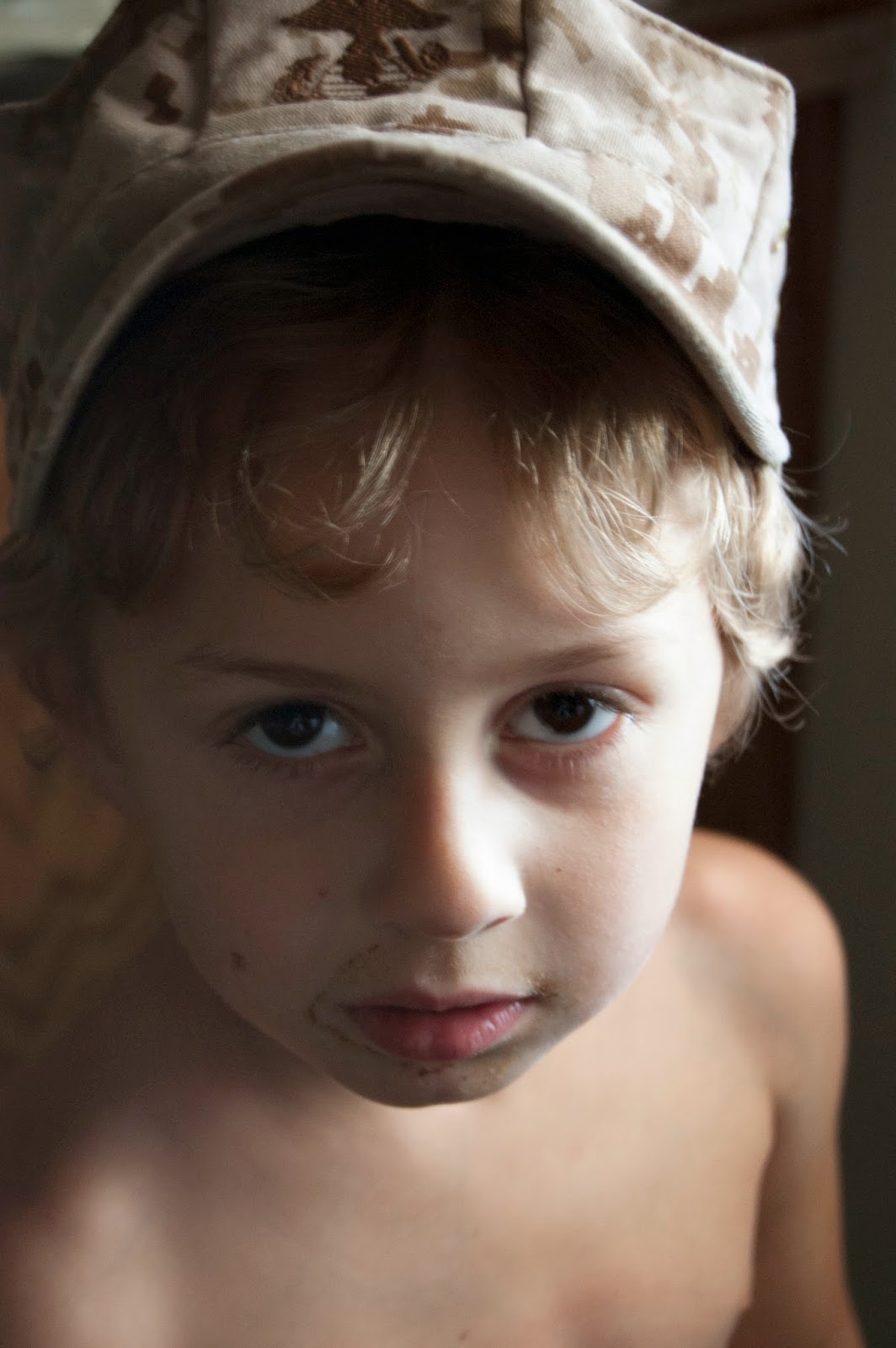 The thing is, I don't always have chocolate. Often times, I don't want to give him chocolate either. My little guy is pretty sensitive to sugars and "junk food". They contribute a lot to his behavioral issues. When I keep his diet pretty controlled, his behaviors are a little less "out there".  He's diagnosed on the Autism Spectrum with ADHD and SPD, with ODD tendencies. As much as I'd like to say, "Oh yeah, that's what's making XY&Z worse!", there's not really any way for me to know what certain foods are affecting what specific behaviors because, well...they all sort of blend and meld together, and often times feed off one another. So the general rule is, "Don't give him too much junk, and we'll be able to get through the day easier." A good rule of thumb is to not bring too much processed food into the house in the first place, and then there won't be a melt down.
However, on occasion we do have Nutella. Or a less processed version of it. It's been known to happen that we've found him at any time of the day or night sitting/standing on the counter with a spoon and a jar of the chocolatey goodness. And a chocolate mustache. The trick is to offer it to him in small controlled servings!
I discovered this recipe for flourless peanut butter cookies a few years ago. Over the years I've added a few different things to them, like chocolate chips or a dollop of strawberry jam to make them "PB&J". The kids don't really care what I do with them, as long as they can eat them. Often straight off the pan out of the oven.
I let my little guy help me mix them up on the backporch (we're spending lots of time out there this year!), which he loved. I usually have the baby attached to me some how, so my little guy likes when he can help me with just about anything. He thinks the baby is hogging me. Jealousy, you think? Umm, yes. Seeing as this is usually how he sees me. 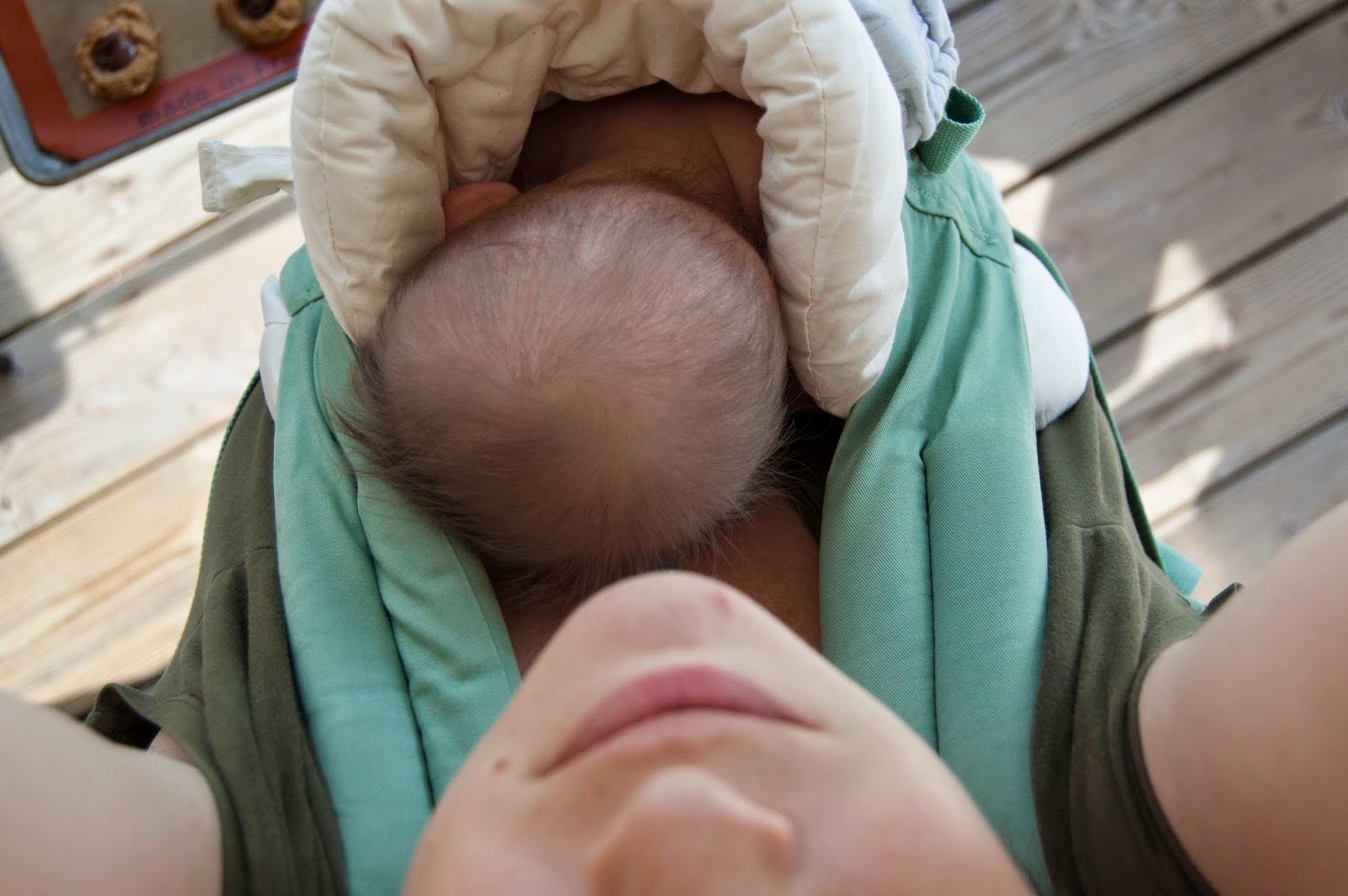 The recipe is simple. 1 cup of peanut butter, one cup of sugar, one egg, one teaspoon of vanilla. Stir. Bake at 350 until the edges are golden brown. It's fun for the little ones to mix. And they can't really mess it up. This time we made thumb prints in them that we plopped a little spoon of Nutella into. There's his chocolate fix! This makes about 2 dozen. 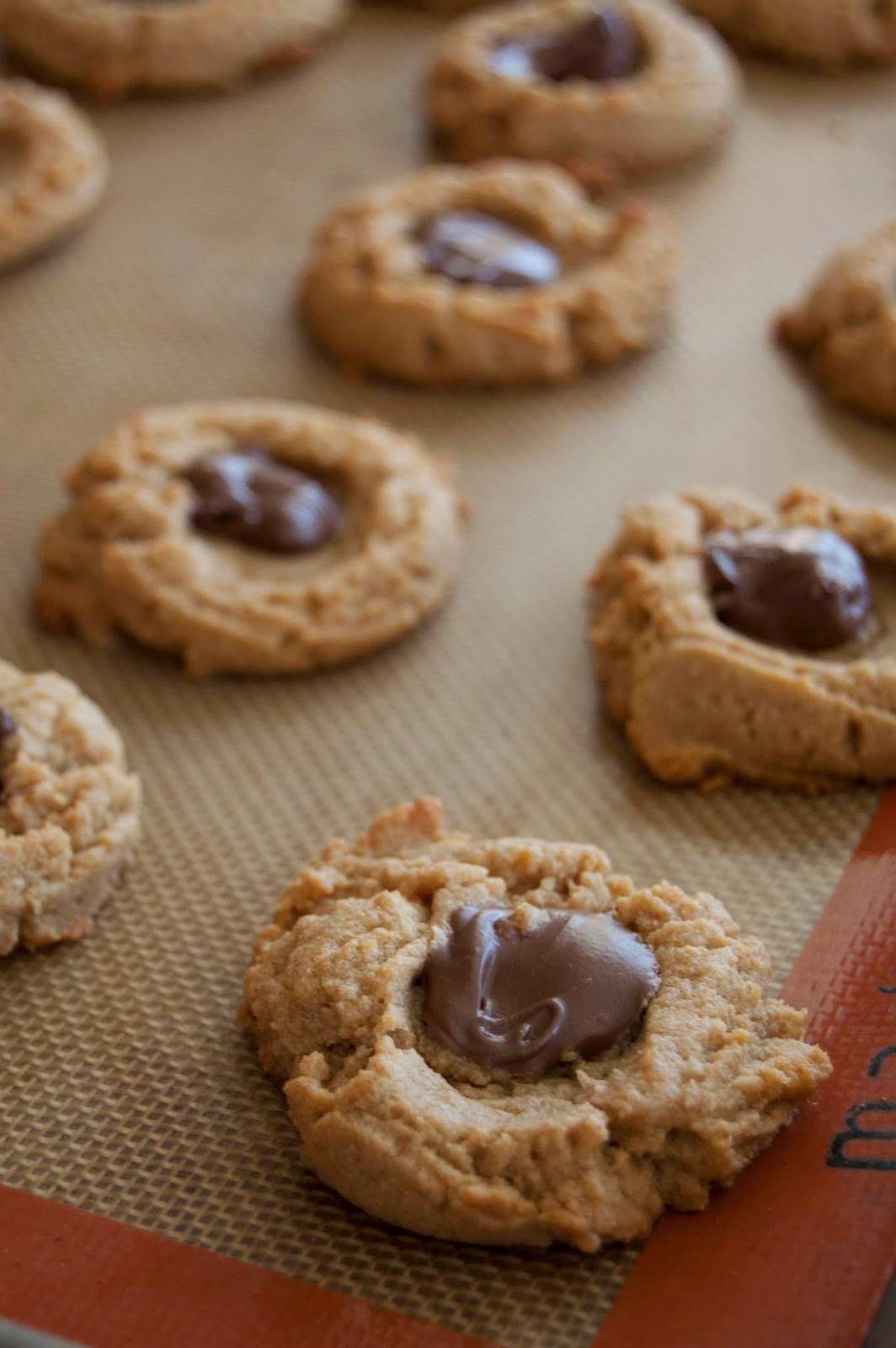 The whole cookie-making process was long enough for the baby to catch a cat-nap. I discovered that my little guy thinks that the texture of peanut butter cookie dough is like wet sand. Some playing may have occurred. It was long enough for him to have some fun, and short enough not to be over-the-top messy. Which is great, especially when this little one wakes up and wants some attention. I'd much rather munch on cookies and play with her and her siblings than clean up dirty bowls, for certain. 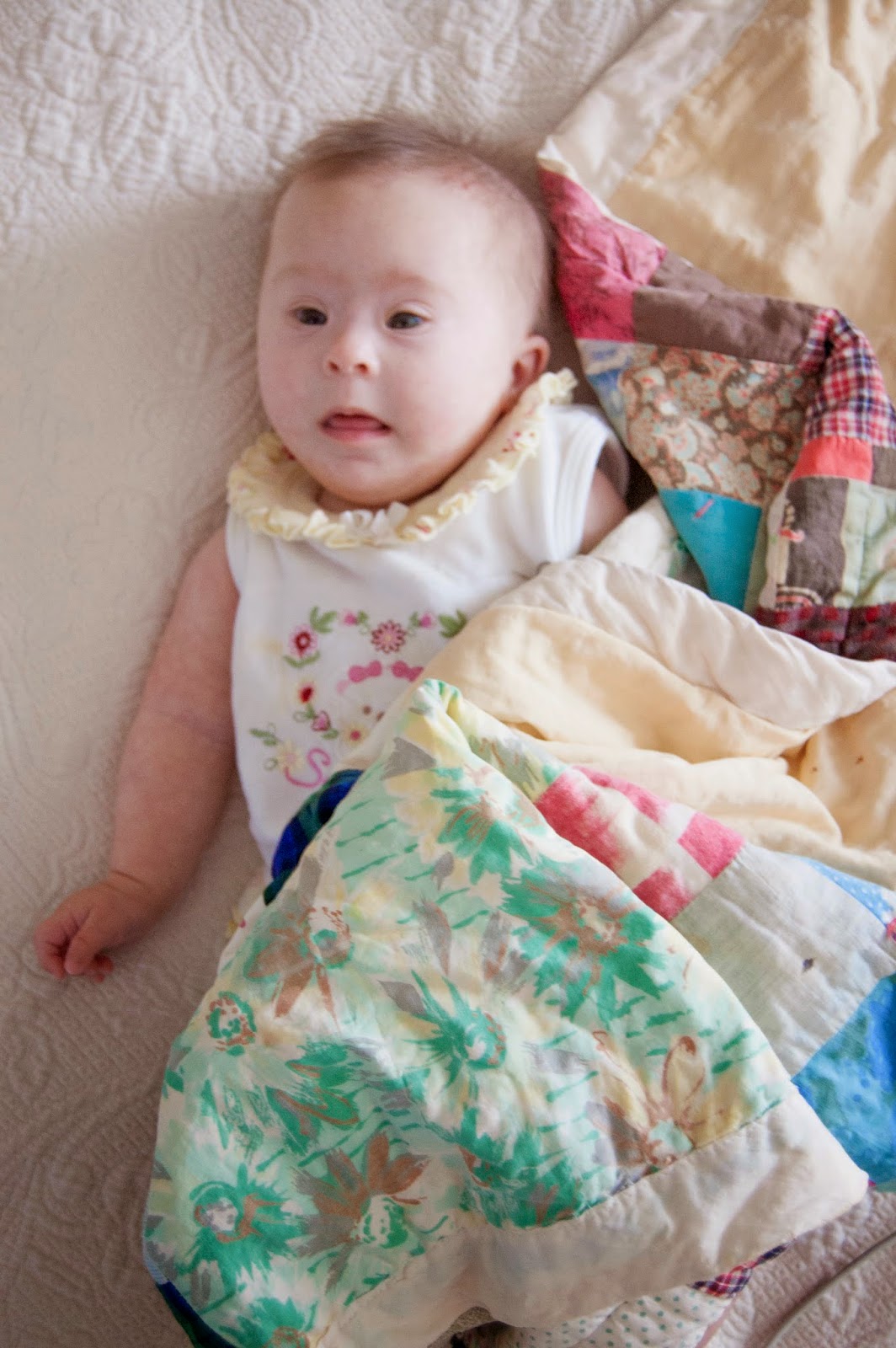