It's my guess that when any baby is born we do a whole lot of processing. Through the new parent fog, that is. I find myself doing that. So many things have gone on in the last months alone that I find my head swimming sometimes. There are some things that have unfolded in our story that have made such a deep impression on how I see things. Let me share.

I was about a month pregnant. I was sick already, and feeling overwhelmed by the idea of being pregnant already. I knew I would be sick for the majority of my pregnancy, and it wasn't something that I was looking forward to. My pregnancies were never easy. This particular day I was feeling exhausted, and I had just finished being sick in the bathroom. An overwhelming feeling of knowing had been with me for a few days that there was something unusual about this pregnancy and something special about this baby.

Have you ever had that feeling of knowing, where you just knew something? Where, without a doubt, you knew what was going on? There have been a couple of times in my life where I've just "known". On those occasions I was always afraid to speak the knowledge out loud for fear that what I thought I knew would come to be true. What I always end up feeling is that maybe if I just keep this "knowledge" to myself that it'll pass, that it really was just all in my head. This wouldn't let me be, though. It was eating at me. It wouldn't let me have peace.

I approached my mom and ended up in tears before I even said anything. I shared with her.
"Mom, I think this baby has Down Syndrome." I was crying not because of the idea of a Down Syndrome diagnosis, but because I would have to tell everyone else and I was afraid of what reactions I would get. In this moment I thought I was nuts so I thought she'd think it was a little nuts, too. She didn't blink an eye. She just assured me that everything was going to be ok, even if this baby did have Down Syndrome. Everything was going to be ok, and God was in charge. He had a plan. And with a hug, that was that. After that I didn't think of it again. I never considered the whole Down Syndrome diagnosis again. Until months later, but we'll get there.

In the first few months of your pregnancy they offer you the test to look for diseases, etc. I've never had it, with any of my children. My feeling has always been that it didn't matter to me either way if my child had a disability or not. It was still my baby and I'd love him or her just the same. The stigma that comes with that test...Basically what you are fed is that if you have an unfavorable test result your option is to terminate. Or, almost as an after thought, keep your baby and just deal. Termination would never be an option for me. What you are not told is that this test can help you and your baby as well. Prenatal care can be better, more in depth, counseling can be given you, support groups can be found for you, you can start to prepare and educate yourself so you don't feel like you've been thrown into a pool without knowing how to swim. Why don't they tell you that? It would take 5 minutes. Five minutes that could do you a world of good. It's hindsight now. If I'd known more about it, I may have decided to have the test done. When I met with the Genetics Counselor she angrily spoke out against dr's who don't take time to explain this to parents. Especially those women who are already experiencing high risk pregnancies, like myself.

At one of my early scans, we found a bright spot on baby's heart. Further scans showed the same. Her heart looked ok aside from the spot. I started having frequent scans, and even more frequent appointments to keep an eye on things. The doctor never hinted at anything being excessively worrisome though. At subsequent scans, the bright spot was gone. But then baby's growth started to slow. Again, if something was amiss or hinted at Down Syndrome the doctor never mentioned it. I watched carefully during each scan, counted fingers and toes, observed her cord and her spine, saw her breathing movements. Then at one of my scans she focused in on my baby's face. We watched her yawn and rub her face with her hands. I looked at her sweet face and saw a slightly smooshed nose, and broad forehead. I believe I was about 8 months along now. When the doctor printed out the picture I couldn't stop looking at it. Over and over I looked at my sweet baby, and I saw what I had suspected, what I knew early on. I saw it. But the doctor said nothing. I didn't think to ask. What would I say? How did I ask about it? So I didn't. It didn't matter. I loved her anyway. 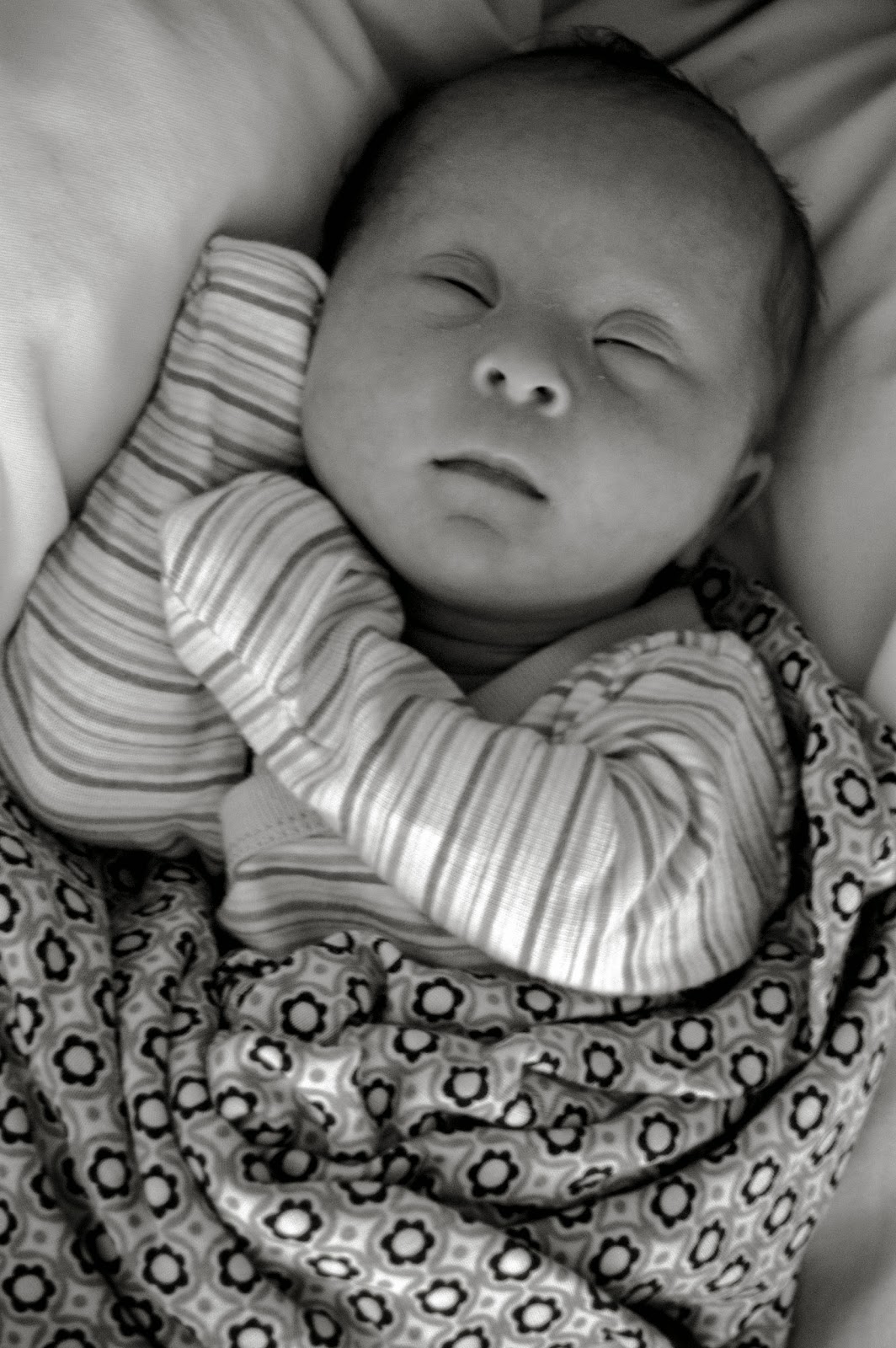 If you go back and read my birth story, you'll see how it was a little scary for me. Thinking about it now, it would have been helpful for the medical team to know she had Down Syndrome so that she could be cared for properly from the start.
I distinctly recall now how the nurse asked me several times if I thought she looked like my other children. I thought that was odd at the time. Of course she did! She does resemble my other babies in several ways. What didn't occur to me until just recently was that she kept asking because I think she wanted to know if I saw that she had Down Syndrome. What a silly question, I thought to myself. I knew before she was born. When they lay her on me after birth, I saw it. I saw it more clearly than the ultra sound picture showed. I recognize that perhaps they were trying not to scare me, or panic me by saying it out loud. All the while I was thinking, "Do they not see it? Are they blind?" When the doctor came from the special care nursery, she was so kind. She matter-of-factly told me that she suspected Down Syndrome, and why, etc. I listened and felt sorry for her for trying to be gentle with me and not scare me with this possible diagnosis. I saw how difficult it was for her to have to tell parents this hard news. I think it was harder for me to see her having to go through that than for me to be receiving that news from her.

I've read a few stories of mommies that received prenatal diagnosis of Down Syndrome.  Some felt panicked, some felt uncertain about how the future would go and if they would be able to deal with it. For those that received the diagnosis after birth there was confusion, disappointment, grieving. Perhaps at some point I may experience some or all of those things. For now I feel peaceful about everything. There are and have been some challenges, but I'm so in love with this little person. I've seen some people peek inside her carseat to look at her and I see the light in their eyes change. They recognize her as having Down Syndrome. But what they "see" is just the surface. She is a sweet, easy-going, very alert baby. Everyone that spends time with her falls in love with her. And that is just as it should be. When I had that nagging feeling of intuition all those months ago before I even knew what she looked like on an ultra sound screen, I just wanted her to be loved by everyone as much as I loved her. That's still all I want for her. To be loved and accepted. I'm pretty certain that is all any mother wants for her child.

No one knows what the future holds. I'm ok with not knowing what may come. Motherhood is becoming the "adventure of a lifetime". There seems to always be twists and turns in the plot of our family story, never a dull moment. And really, it's beautiful. I still crave "dull" and "boring" most days, but I'm becoming ok with just accepting each adventurous day at a time. Today was a good day.