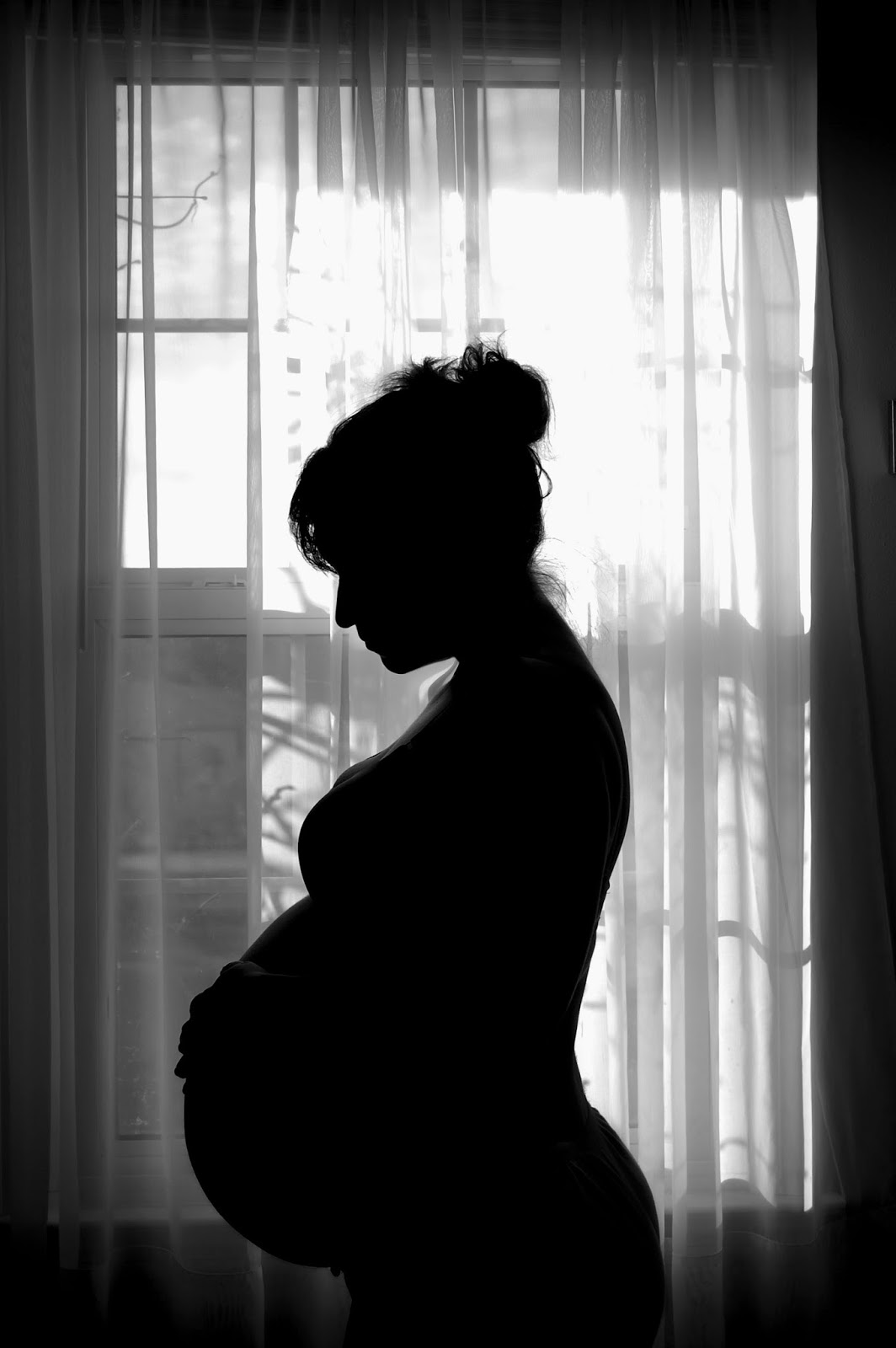 Where to begin...at the beginning of my 37th week! This was the last time I would get a chance to take a profile picture to record my pregnancy. I'm so glad I did because only a few days later my little lady was born into the big wide world.

It all began with my regular check up at the doctor. So many different things went on during my pregnancy that we were keeping a pretty close eye on things. Pretty early on her growth had begun to slow significantly. There were many concerns and lots of unknowns, but at this appointment everything looked fine. Nothing was better or worse, just the same. I complained of pain, that I thought was baby grinding her head down low. I had begun to notice her "drop" a few days earlier and my waddle was even more pronounced. Little did I know that I'd already been in labor for days, and what I thought was her head, was actually pretty good sized contractions! 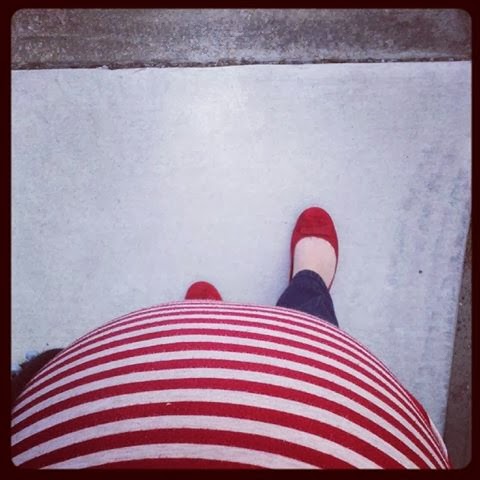 (On my way in to see the doctor for my last prenatal appointment!)

We ended up going in to Labor and Delivery around 8 pm that same night. I was having consistent contractions 3-5 minutes apart and didn't even know it. I only felt "the big" ones, which were about every 15 minutes or so, and didn't know I was actually really truly laboring until they put a monitor on me. The nurse would ask me, "Did you feel that?". And I would reply, "Uh...no....?"
My Hypnobaby hypnosis was working better than I thought!

I was monitored all throughout my labor because my baby's heart rate kept dropping dangerously low. I was really fearing that they would try to tell me that I needed to have a C-section, and I was praying that everything would be ok. I kept having to move to keep her heart rate up. I labored all through the night, and it wasn't until the morning around 7 or 8am that things really started to pick up. Transition came on fast and strong. I chose purposely to labor and deliver medication free because due to the complications during my pregnancy I was concerned that there might be something amiss and wanted to be able to be up and mobile as quickly as possible afterwards. Let me tell you, it was HARD work. I hadn't slept all night, and I was laboring HARD. Little did we know that baby Lisette was posterior. I was having intense back labor, worse than with any of my other babies. Thankfully transition went quickly! But it was scary too, because once again baby's heart rate was dangerously low and they kept repositioning me to try to bring it up. In the end they could no longer pick up her heart rate and inserted a monitor on her. Can I just say, that was NOT FUN. But necessary, none the less and I'm grateful in the end.

When it came time to push, it didn't take long. Only a few pushes and she made her presence known!

They put her on my tummy, all covered in a thick thick layer of vernix. 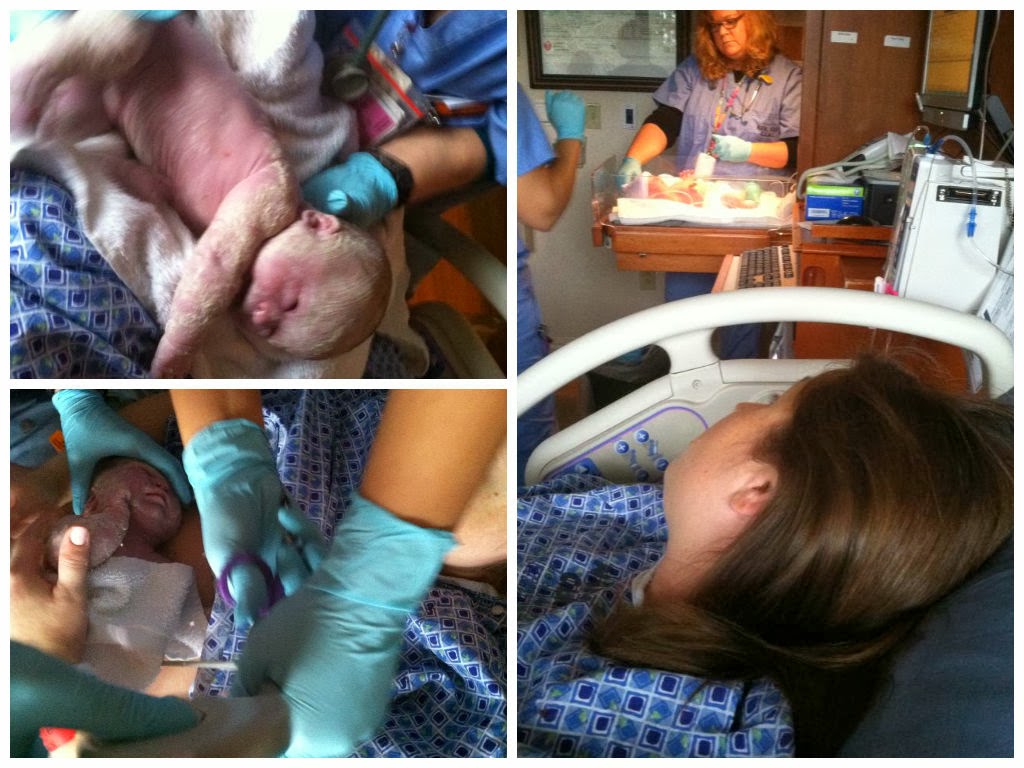 Within moments, it seemed, that she was laid on my belly she started to struggle with breathing. Shortly after she was whisked away by the Neonatal nurse who was standing by just in case of something like this for assessment. Her oxygen saturation was very low. Her muscle tone was very low. They took her to the NICU almost immediately.

It wasn't until later that day that I got to go visit her. They were busy assessing her and getting her stable. 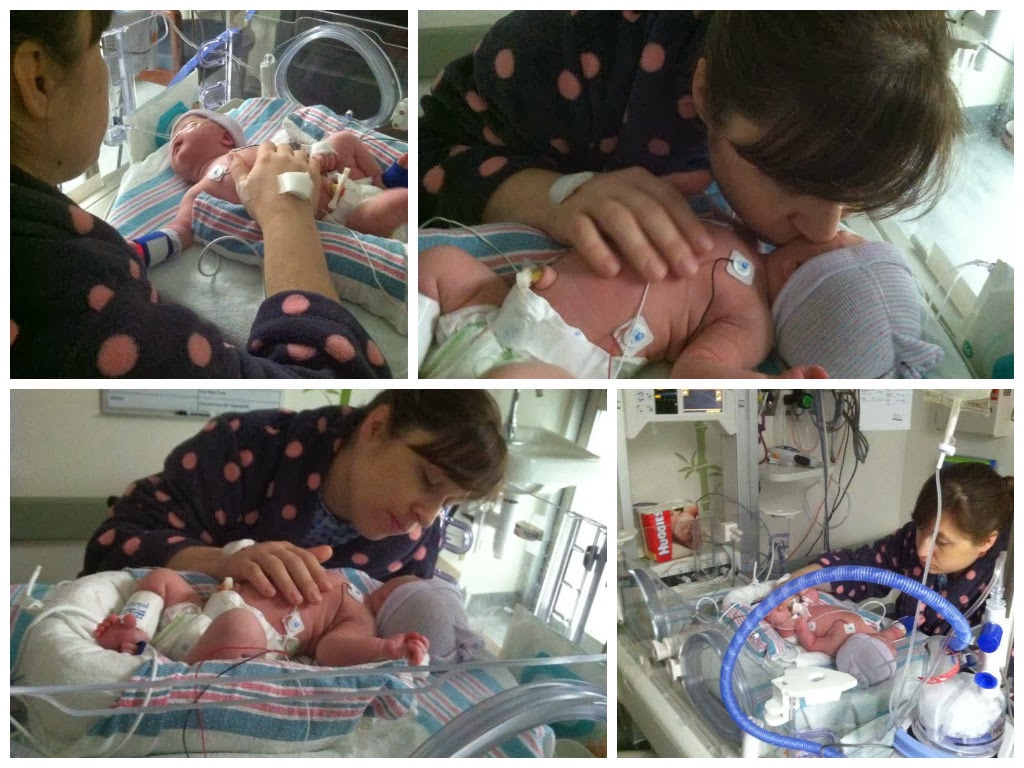 It felt like a lifetime before I was able to hold her. It's a bit of a blur, those first couple of days. There were breathing tubes, and feeding tubes and IV's, and alarms. And pumping around the clock.

Our little adventure in the NICU continues, as it's been a week now that it's been her home and mine. What comes next is another adventure in and of itself as we await the results of her chromosome test. Everything is pointing towards Down Syndrome and it explains a lot of the "why" things went the way they did during my pregnancy, as well as labor & delivery. Heart problems are quite common with these babies I've been told and read.

In the mean time, I continue to be by her side as much as I possibly can. I pray that she'll grow stronger so that I will be able to bring her home soon. My other kids are so anxious to have her home, and I am anxious to have us all together.

Nothing about any of this pregnancy and birth went as I hoped it would, aside from avoiding a C-Section. (That's a pretty big deal I guess!) But in the scheme of things, I'm just grateful for her life. I'm grateful for all those that were with me to help me through these things, and for all the help I continue to receive. I feel blessed abundantly amidst what seems like a storm at times. I'm not sure what's on the horizon, but I know God has a plan and I'm willing to go along with it. I know I'm loved, and I know Lisette is as well.