In October of 1988, President Ronald Regan proclaimed that October be Pregnancy and Infant Loss Awareness Month.

He said,
"When a child loses his parents, he is called an orphan. When a spouse loses hers or his partner, they are called a widow or widower. When parents lose their child, there isn't a word to describe them. This months recognizes the loss so many parents experience across the United States and around the world. It is also meant to inform and provide resources for parents who have lost children due to miscarriage, ectopic pregnancy, molar pregnancy, stillbirth, birth defects, SIDS, and other causes."

I am grateful to our former President for bringing to light something that had been hushed and avoided for so long. Parents need support and love when they experience this sort of loss, and it is admirable of him to have made such a declaration. The sad truth is that there is a bit of stigma that is attached to the death of a child. My experience has been that those who have not suffered the loss of a child, often times, have an extremely hard time understanding the depth of sorrow that parents can feel. With that loss parents loose hopes and dreams they've had for the future, with that individual child. Parents often recieve well intentioned (but hurtful none-the-less) comments like, "Oh you can have another", or "It just wasn't meant to be". I can understand wanting to say something comforting at a time of loss, but when it is a child you must step lightly. The best you could do would be to offer something like, "I'm so sorry, I can't even imagine your pain." Or even something like, "What was he/she like? I didn't get a chance to know him/her." You'd be surprised that even a mother who lost a pregnancy early on could share immensely about what her unborn child was like in utero. Don't be afraid to mention a child who has passed away to his or her parents. They want people to remember.

I'd like to share my story, but I do want to give you a heads up that it might be triggering if you have lost a child of your own, if you are pregnant and very emotional right now, or if you are just not prepared to visit this sort of experience right now.

My Story~
My own story happened about 5 years ago, and without a support group and caring individuals I may not have been able to climb out of my depression.

My husband returned from an unaccompanied tour in Okinawa and we got pregnant with baby #3. We named him Thomas Christopher. Remember the other day I wrote about having very few pictures of myself pregnant? These are some of the few I have! I'm so grateful for these few pictures. Pictures are such precious little things when you have lost a child. They become treasured items.

I think I was about 15 weeks pregnant in this picture. 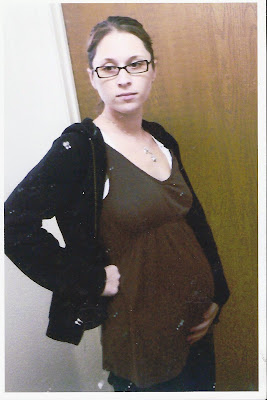 At 19 weeks and a few days, we went shopping at Target. When we were nearing the end of our shopping excursion, I doubled over with horrendous cramping and contraction pain. Something was seriously wrong. I almost couldn't walk. We left in a hurry and I lay down at home to rest. I felt nothing after that. No baby kicking. No more cramping. Just nothing. The next day I had an ultrasound and we would find out that baby was a boy.

That night, though, I dreamed that our baby had passed away. I dreamed I stood at the gate of Heaven and handed him to welcoming arms on the other side, and that he was ok. Though I wasn't upset in the dream, and it was rather comforting having experienced handing him over to caring and loving arms, it was not the sort of dream any mother wants to wake up from. I didn't know he had passed away yet, but it's what I feared. I told my husband about my dream when we were on the way to the appointment. I dreaded what we would discover, but tried to stay calm because we had our two other children with us. When it was confirmed that he had passed away, I fell apart...and saw the look of shock on my husbands face. At that moment I hated myself for having told him about my dream. It was one of those moments when I didn't want to be right.

I stayed awake all night. And cried. The tears just kept coming, even when I thought that I had no more. I had called my mom and she drove with my youngest brother a good 6-8 hours to come be with us. I took one last picture of my belly. The fluid around baby had already started to lower and my belly started to soften quickly. I didn't want to forget him. 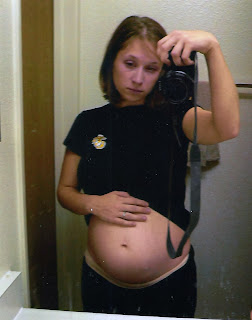 I was induced a day later. It was a cord accident. Our little boy was a gymnast and tied himself in knots. I held him. And cried. And tried to memorize his little face and everything else about him. My husband held him, and then left to go be with our kids. My mom came and held him. And then I kept him next to me all night. I only slept out of exhaustion, and woke often to make sure someone hadn't taken him away yet.


The one picture I have while I held him. 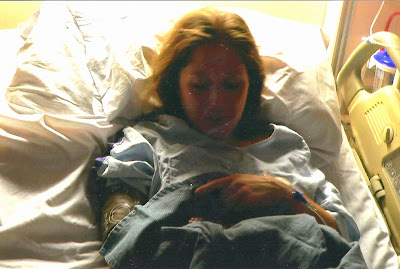 The next day, I finally let the nurses take him away, clean him, wrap him in a clean blanket and hat and take pictures of him. They brought him back to me. But I knew the time had come when I had to let him go. When they are that tiny death acts quickly. (I knew that I needed to let him go before my husband came back with the children. My kids are so very sensative, and they were so very young. We felt it was best for them not to see him that way. I know for some families that might not have been the right decision, but it was for us. When they are older I will share what few pictures I have with them if they are interested.) The hardest thing I ever had to do was to cover him for the last time and watch the nurse wheel him away. I remember my last act as his mommy to his physical body was to instruct the nurse to take care of him. She promised, and took him to the morgue. It brings fresh tears thinking back on it now.

We had our son cremated. It wasn't until after my husband left for deployment a month or so later that I was finally about to go about taking care of the burial arrangements. I'm forever grateful to my older brother for helping me take care of those details. I was still so deeply in mourning. Once his urn was placed in the mausoleum I had more peace. It was finished.

For many months afterwards, I went to a support group for parents of infant and pregnancy loss. It helped me immensly. And as a sort of therapy I made blankets and hats and donated them to the local hospital for other parents of infant loss. Someone was kind enough to donate those items for my own baby. I felt a need to do the same for another family.
It's been 5 years now, and time does heal your heart. The sense of loss is always there, but the hurt has turned to acceptance. You don't forget, but you learn to live with the loss. It just becomes a part of who you are and your journey.

If you are a mother or father of a baby or child who has passed away I pray today that you will be comforted. You are not alone.