My younger son is a rambunctious little one. He finds it fun to find all sorts of trouble to get into. Most days, upon waking, I say a funny little prayer--"Dear Lord, please let us get through this day. Amen." (You think I'm joking!) He's a smart cookie, even at only 2 years old. For example, just the other day he somehow managed to remove the wooden accordion doors from his closet. I still don't know how he managed that but he's quite inventive so I wouldn't put anything past him.

That he managed to somehow remove the plug from his older brothers piggy bank didn't surprise me. While I was collecting the money trail he left, he then proceeded to lose that precious plug somewhere. It did pose a problem with keeping money in the bank. If you go to the craft store, they look at you a little funny if you ask them to point you in the direction of piggy-bank plugs. We needed a new piggy bank, stat. With a plug/lid that couldn't be removed. 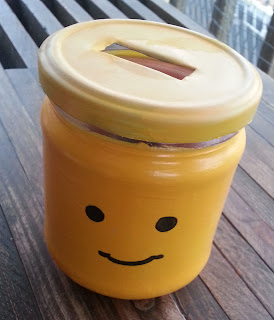 We used to say "Google that!", but now our saying is "Look on Pinterest!" Of course we found something to work! It's cute and fun and when my older son saw it he thought it was awesome. What boy doesn't love Lego's after all?

So here is what I did.
I got out what supplies I had on hand.
A paint brush
Gesso
School Bus Yellow Acrylic Paint
Protective Spray Gloss
A box cutter
Pliers
Jar shaped in the general shape of a Lego head, short and squat 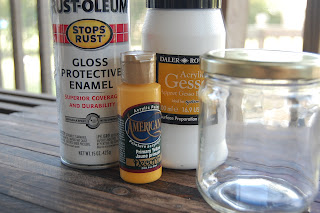 So first make sure your jar is clean, with all the labeling and glue removed. Remove the lid and set it aside. Turn your jar upside down and give it a good coating of Gesso.  This will help the yellow paint to stick, and make it less see-through. 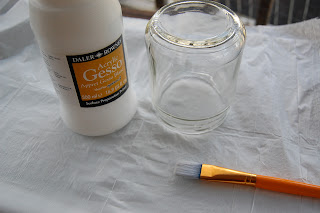 I gave my jar two good coats, letting it dry in between. I didn't paint around the rim so that the lid could still fit on securely. I would suggest taping off the rim neatly to get a nice crisp line around the edge. Of course I didn't do that because I was in a hurry to get my sons money back into a safe place! 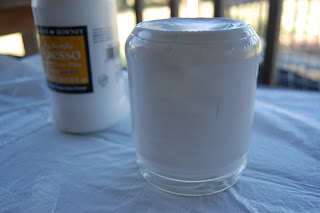 While that was drying, I went to work on the lid. Using a marker, mark where you want the coin slot to be. 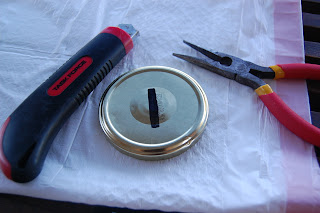 Very carefully, (maybe wear some gloves while do this), cut around the edge of your mark with your box cutter only cutting along three sides. Don't cut all the way around. If you cut all the way around it will leave the edges raw and we don't want any little fingers getting cut from the sharp edge. 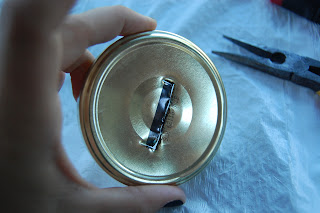 Using your pliers bend back the little flap that you just cut. Tuck it under and flatten it as best you can on the under side of the lid. 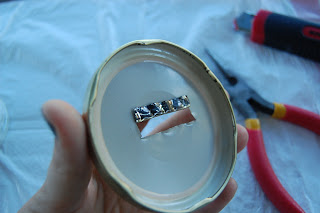 Repeat that step, so that you have a flap on the other side. 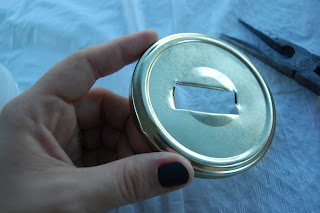 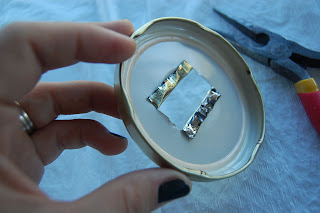 Give your lid a good coating of Gesso as well. 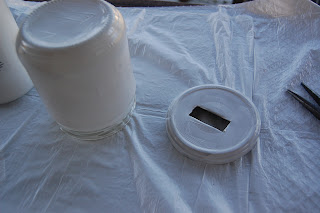 After the Gesso has dried completely, paint your jar and lid yellow! 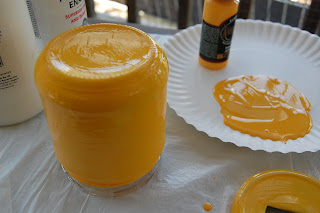 Again, I gave them two thick coats of paint. Let it dry completely.
And then Google Lego faces! Find the one you like and draw it on using a permanent marker.
Make sure your paint is dry before you draw on it. It's a little hard to see, but in the photo on the left, below you can see where I made the mistake of drawing on it too soon. The layers of paint and Gesso wrinkled up. Solution--wait for it to DRY! :) Then paint over where you messed up and try again! 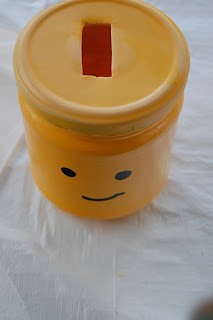 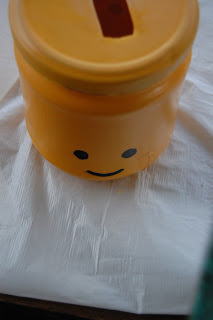 Once the paint is dry and you have drawn on your face, give it a good coating of spray gloss. It will be nice and shiny just like a lego!
If you have a Lego fan in your bunch this is a fun project. You could even do a little collection of them with baby food jars and use different faces for different coins.