Competition- To run, or not to run. 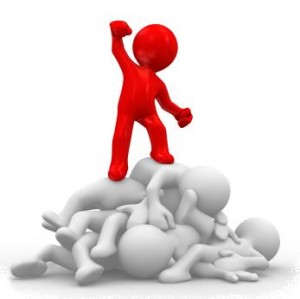 1.the act of competing;  rivalry for supremacy, a prize, etc.: The competition between the two teams was bitter.
2.a contest for some prize, honor, or advantage: Both girls entered the competition.
3.the rivalry offered by a competitor: The small merchant gets powerful competition from the chain stores.
4.a competitor or competitors: What is your competition offering?
5.Sociology . rivalry between two or more persons or groups for an object desired in common, usually resulting in a victor and a loser but not necessarily involving the destruction of the latter.
When I read that definition, I automatically cringe. I've always avoided competition, unless I knew I could come out on top somehow. The thing about me is, I'm in constant competition with myself. "Do it better! Do it smarter! Do it more perfect! Make it (whatever it is) irresistible!" Honestly, I have no idea where that came from, but I've always seemed to be that way. The idea of competing with others, though, makes me super duper nervous. If anything were to send me into a panic attack it would be the idea of having to "perform" against someone else.

When I do have to deal with competition I take steps to prepare myself. My strategy consists of scoping out my competition! I find out what they have that I don't. I find out where they have failed that I can succeed. Then I find out what other people are saying about them. That can be the most important aspect of all. "Know thine enemy." (I'm not saying I have enemies. In fact I hate the idea of having enemies as much as I hate the idea of competition. But...you never know!) I guess the idea is to be prepared, one step ahead, or at least have something new or better to offer.

Now, the trick is to do everything in the last paragraph, without getting "in your face". That's the trick. I would be awful as a sales-man. I would need a script. I like to let my actions speak louder than my words. This is something that I've always found important because people can say one thing, and do an entirely different thing for whatever reason. Honesty is the best policy. If you can't do something, just say "no I can't", but add onto that, "however, I can (insert your selling point!)". Or, ohmygosh, recommend someone who can do what is being asked for. You might think it's old fashioned, but people do honestly respect and come back for more of whatever you have to offer, if you are honest with them. And in the end, your competitor will come to respect you. Put a little good old-fashioned humanity back into the world! Yes, be kind to your competition. It's the golden rule of "do to others what you want done to you". I would much rather be on good terms with my competition than have them feeling "ugly" competition towards me. My recommendation--take the high road. Know your competitor (where ever that competition may be), but don't feel you have to put up a fight. If you start to feel that, walk away and focus on your strengths, and strengthen them even more before looking around you.

Remember, some good competition can help you be a better you, too! (Even if you have to psych yourself up like I do! :) There's always something new you can learn from some friendly competition. Sometimes the best lessons are the ones we learn about ourselves.