Experimenting in the kitchen!

If you're truly a crunchy granola mom, (I don't like to admit to it, but I think my husband secretly calls me that), then you might know about Ezekiel bread.  It's chewy, full of nutrients, good for your body.

My mom convinced me to try making some. It took a few days due to sprouting the grains, but once it was baked it was worth the effort! 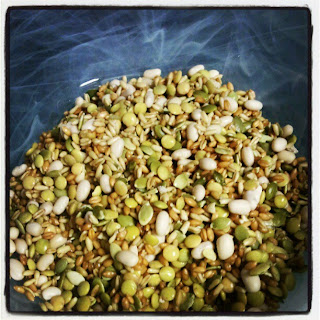 I started by sprouting about four cups of grains. I used red wheat berries, oat berries, lentils, navy beans, and pumpkin seeds. After rinsing them, I let them soak overnight.
I drained them, gave them another rinse, and put them in a bowl with a couple of damp paper towels over the top and topped with plastic wrap. Over the next 36 or so hours I rinsed the grains in a siv to keep them from getting mushy and to avoid souring. It kept them just damp enough to sprout.
After they were sprouted, I put them in a food processor, and ground them up a bit. Not to mush, but enough to crack the seeds and grains open.  Stir in about 1/2 tsp of salt! Next time I think I will pulse them just a bit longer so it's not so its less "grainy".
Next I "kneaded" the dough a bit. I use the word kneaded lightly because it was more like squishing it altogether to make it a cohesive loaf. Now I was aiming for a loaf, like the ones you get from the store, but keep in mind that there is no yeast or flour in this recipe, so there isn't much rising going on as it bakes either. Next time I think I will make a free-form loaf and shape it so I am able to slice it better for toast or sandwiches.

Once the loaf was shaped, I popped it in the oven for about 1 1/2 hours. It was golden brown, didn't rise much, but had a few cracks in the top. When it was cooled and cut, it was still pretty moist inside. Next time I think that I will bake it a bit longer. I like it a bit drier on the inside, and I think this dough can handle it especially with how hearty the grains are. 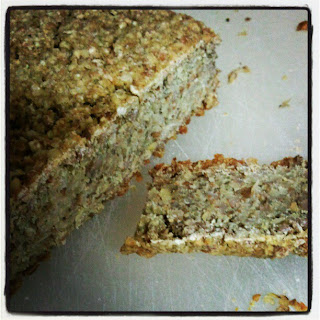 It you are a interested in trying your hand at a sprouted grain bread, click the 1st picture above and follow the links to a great step by step recipe for a similar bread!